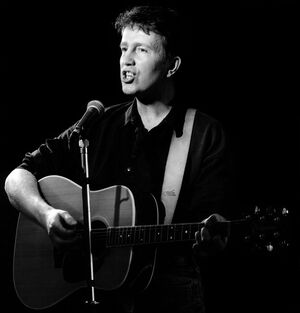 Tom Robinson (born 1 June 1950) is a British singer-songwriter, bassist and radio presenter, best known for the hits "Glad to Be Gay", "2-4-6-8 Motorway", and "Don't Take No for an Answer", with his Tom Robinson Band. He later peaked at No. 6 in the UK Singles Chart with his solo single "War Baby" in 1983. Apart from his Tom Robinson band (1976-1979) and his solo music career, Tom also does radio presenting, including programmes on all the BBC's national stations: Radio 1, Radio 2, Radio 3, Radio 4, 5 Live and 6 Music. He presented The Locker Room, a long-running series about men and masculinity, for Radio 4 in the early 1990s, and later hosted the Home Truths tribute to John Peel a year after his death in 2004.  In 1997, he won a Sony Academy Award for You've Got to Hide Your Love Away, a radio documentary about gay music, produced by Benjamin Mepsted. He currently presents his own show on BBC Radio 6 Music, featuring live music sessions, on Monday and Tuesday nights, and freelances on Radio 2's Mark Radcliffe Show and Radio 4's Something Understood, and Pick of the Week. In 1994 he wrote and presented Surviving Suicide, about his suicide attempt.

Robinson was a regular listener to Peel's Perfumed Garden show on Radio London, finding the programme an inspiration during his troubled adolescence, while he was living in a therapeutic community after the suicide attempt mentioned above. He corresponded with Peel during the DJ's early years at the BBC; a 1968 postcard from the DJ to Robinson is reproduced in Margrave Of The Marshes (ref.) and also on the Peel tribute page on the official Tom Robinson website. Later, Tom Robinson also sent Peel demo tapes of his band. In October 1979, Robinson brought back a quantity of singles from Sweden and gave these to Peel to play on the show [1]. The following year, Tom returned from a trip to America with a further selection of singles for Peel [2]. In 1999 Robinson became a columnist on Peel's Radio 4 programme Home Truths and after Peel's death, was the main presenter for 12 editions of the programme. In October 2005, Tom Robinson paid tribute to the man by visiting his family for the Home Truths tribute. Peel's sons William and Tom also visited Tom Robinson on his show on 6 Music in 2009 to present their favourite tracks of upcoming artists and be interviewed.

(The database is incomplete. Please add further information if known)

Retrieved from "https://peel.fandom.com/wiki/Tom_Robinson?oldid=237677"
Community content is available under CC-BY-SA unless otherwise noted.