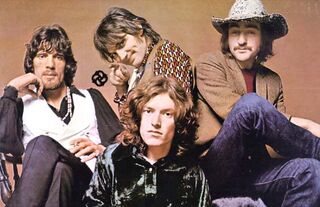 Traffic were an English rock band, formed in Birmingham in 1967. The group formed in April 1967 by Steve Winwood, Jim Capaldi, Chris Wood and Dave Mason. They began as a psychedelic rock group and diversified their sound through the use of instruments such as keyboards like the Mellotron and harpsichord, sitar, and various reed instruments, and by incorporating jazz and improvisational techniques in their music. Their first three singles were "Paper Sun", "Hole in My Shoe", and "Here We Go Round the Mulberry Bush".

After disbanding in 1969, during which time Winwood joined Blind Faith, Traffic reunited in 1970 to release the critically acclaimed album John Barleycorn Must Die. The band's line-up varied from this point until they disbanded again in 1975. A partial reunion, with Winwood and Capaldi, took place in 1994. In 2004, Traffic were inducted into the Rock and Roll Hall of Fame. (Read more at Wikipedia)

John Peel had been aware of Steve Winwood's work with the Spencer Davis Group from his time in the USA, where their singles "Gimme Some Lovin'" and "I'm A Man" made the Top Ten charts. (He also saw the Spencer Davis Group at Liverpool's Cavern Club during a holiday in the UK in 1965, according to The Cavern Club: The Rise Of The Beatles And Merseyside book[1]) Traffic made an immediate impact in summer 1967, with their first single "Paper Sun" reaching high positions in both the national chart and the Radio London Fab 40. With its sitar backing, the song was very much in the style of the time and was played on the Perfumed Garden. Peel also played "Smiling Phases", the B-side of their follow-up single "Hole In My Shoe", as an untitled acetate on the final Perfumed Garden.

Traffic were also among the session artists on the first Top Gear of 01 October 1967. A second session was broadcast on 24 December 1967, two more followed in 1968, and another in 1969 by Mason, Capaldi, Wood and Frog, the band which combined the ex-members of Traffic (after Steve Winwood's decision to leave the band and join Blind Faith) with keyboard player Wynder K. Frog. Following Winwood's return, the band recorded a John Peel Sunday Concert, which was broadcast on 10 May 1970. Traffic became one of the most popular British bands with the hippy underground audience, their loose, jamming, R&B-influenced rock style causing them to be compared to the American West Coast bands of the period. Peel admired them and introduced them at the 1970 Pop Proms, writing in his Disc & Music Echo column:

Perhaps the greatest joy of the whole week came from Traffic who played last on Monday. Steve played guitar quite a lot and his playing is so good. Fresh, original and not too loud - and not a single blues cliché all through the set. There was also the feeling that the group was anxious for us to enjoy what they did, and, in consequence, they sounded better than they did pre-Blind Faith and that's pretty good. It's nice to have you back Chris, Jim and Steve. [2]

But Traffic, like other bands of the Top Gear era, subsequently had more success in the USA than in the UK. So there were no more sessions for Peel, although he continued to play tracks from their albums until they split up in 1975. He ignored Steve Winwood's commercially successful 1980s material. but In later years Peel occasionally played tracks by them, revisiting "Paper Sun" as late as 28 July 2004.

Retrieved from "https://peel.fandom.com/wiki/Traffic?oldid=240452"
Community content is available under CC-BY-SA unless otherwise noted.