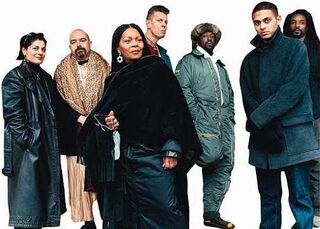 Transglobal Underground (sometimes written as Trans-Global Underground or simply as TGU) is a London-based music collective who specialise in a fusion of western, Asian and African music styles (sometimes labelled world fusion and ethno techno). Their first four albums featured Natacha Atlas as lead singer and their single "Temple Head" was used in a Coca-Cola advertising campaign for the 1996 Olympic Games. In 2008 they won the BBC Radio 3 Award for World Music after the release of their seventh official album, Moonshout. Formed by Hamilton Lee, Dubulah and Tim Whelan in 1990. Musical collaborators since their schooldays, Tim Whelan and Hamilton Lee were previously both founding members of British pop band Furniture and had played with the experimental psychedelic art-punk group the Transmitters. While with Furniture, both musicians had already demonstrated an interest in world music by bringing in more culturally-diverse instrumentation to what was originally a fairly conventional rock band line up... (Read more at Wikipedia.)

Transglobal Underground are contemporaneous with another Transmitters offshoot, Loop Guru, and share their philosophy of democratising and disseminating dance music based on worldbeat, but seemed to be more popular with Peel's audience and his family: on one occasion, JP apologised to William for being unable to get him into one of their gigs [1]. They gained two lower rung FF entries, and recorded two Peel sessions two years apart, the first of which featured TGUs and L Guru's bassist and Guitar player Count Dubulah.

Retrieved from "https://peel.fandom.com/wiki/Transglobal_Underground?oldid=229104"
Community content is available under CC-BY-SA unless otherwise noted.