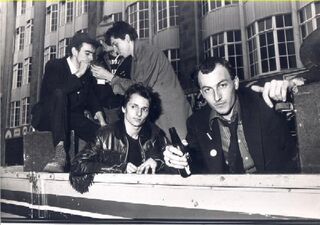 The Transmitters were a post-punk band active intermittently between 1978 and 1989 (they reformed for a reunion gig in 2007 to promote a compilation album). They released two LPs and three singles, and were notable for containing members of future groups: Sam Dodson and Dave Muddyman (Loop Guru), and Tim Whelan and Hammi Lee (Transglobal Underground). In the early part of their career, they were signed to Step Forward, making them label mates with the Fall. They recorded two Peel sessions two years apart, the second of which has yet to see a commercial release.

In a 1989 interview, Sam Dodson gave an overview of the band's musical philosophy:

"We were one of those groups that never fitted into any category. In '79 there were bands like The Pop Group and The Good Missionaries, and we felt a certain kinship to the way they worked. We were more organised than them, but we came up with a much less organised sound. Even now, we've been compared to Stump, to Talking Heads, and I think 'I don't like Stump, I don't like Talking Heads. Why am I doing this?' and I listen to what we're doing and I think 'I love it'. It's because it sounds different." [1]

The song Ferryboat Bill, a Velvet Underground cover, appeared on the Justice Is Our Conviction benefit album, and Dodson admitted, "John Peel played it; he probably hated everything else on it."

Retrieved from "https://peel.fandom.com/wiki/Transmitters?oldid=218882"
Community content is available under CC-BY-SA unless otherwise noted.