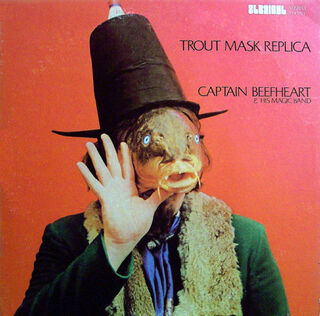 "If there has been anything in the history of popular music which could be described as a work of art in a way that people who are involved in other areas of art would understand, then Trout Mask Replica is probably that work." [1]

Trout Mask Replica is the third studio album by American rock band Captain Beefheart and his Magic Band, released as a double album on June 16, 1969, by Straight Records. Combining elements of R&B, garage rock, and blues with free jazz, avant-garde approaches, and other genres of American music, the album is regarded as an important work of experimental music and art rock. It sold poorly upon its initial release in the United States, where it failed to appear in any charts. It was more successful in the United Kingdom, where it spent a week at number 21 on the UK Albums Chart. In recent years, however, Trout Mask Replica has been widely regarded as the masterpiece of Van Vliet's musical career, as well as an important influence on many subsequent artists. Its highly unconventional musical style, which includes polyrhythm, multi-octave vocals, and polytonality, continues to polarize audiences and has given the album a reputation as one of the most challenging recordings in the 20th century musical canon....(Read more)

Sheila commented that "John's admiration for Beefheart's masterpiece...never palled over the course of more than thirty years," [2] a fact readily observed from the prodigious list of plays (in 1969, 1978 and 1993 in particular). John Walters, in his preamble to the third edition of Peeling Back The Years, span Pachuco Cadaver and added that TMR came from Beefheart's more extreme period: "now clearly Beefheart has been an influential but sort of extreme artist and he still sounds extreme." He also mentioned that in one show (28 March 1972) John featured a staggering 18 (by all accounts actually 17) tracks by Beefheart, three of these coming from TMR.

In an article from an early 1970 Irish magazine called The New Spotlight, Peel mentioned he had two favourite albums in his 1969 LPs Of The Year, naming Van Morrison's Astral Weeks, but not disclosing the other, which was more likely to have been Trout Mask Replica. In November 1987, JP placed the record at number 4 in a list published in OOR magazine; in 1992 it was third best album in Jocks Choice; and in 1997, the LP topped Peel's list of his Top 20 Albums, a feature of the Guardian that ran in tandem with Music Of The Millennium (on which TMR came in 41st position).

Retrieved from "https://peel.fandom.com/wiki/Trout_Mask_Replica?oldid=255790"
Community content is available under CC-BY-SA unless otherwise noted.