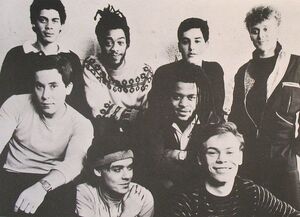 UB40 are a British reggae/pop band formed in 1978 in Birmingham, England. The name of the band is in reference to the signing-on document issued to people claiming unemployment benefit from the UK government's Department of Health and Social Security (DHSS) at the time of the band's formation. The designation UB40 stood for Unemployment Benefit, Form 40. The group has had more than 50 singles in the UK Singles Chart, and has also achieved considerable international success. The band has been nominated for the Grammy Award for Best Reggae Album four times, and in 1984, were nominated for the Brit Award for Best British Group. One of the world's best-selling music artists, UB40 have sold over 70 million records. Their hit singles include their debut "Food for Thought" and two U.S. Billboard Hot 100 number ones with "Red Red Wine" and "Can't Help Falling in Love". Both of these also topped the UK Singles Chart, as did the band's version of "I Got You Babe". The ethnic makeup of the band's original lineup was diverse, with musicians of English, Scottish, Irish, Yemeni and Jamaican parentage. The band's initial lineup lasted for 30 years from the band's formation in 1978 until frontman Ali Campbell's departure from the band in 2008. Since that time, two other founding members (Mickey Virtue and Astro) have also left the band, and the trio of Campbell, Virtue, and Astro have since formed UB40 Reunited. (more on wikipedia)

UB40's first gig was in February 1979 at the Horse & Hounds in Kings Heath in the West Midlands, where they managed a session for a local radio station. As luck would have it, a certain Mr John Peel heard the broadcast and before the band knew it, they were recording a session in 1979 for national radio on his BBC Radio One show, which was broadcast in January 1980. Peel constantly supported the band with playlists and sessions over a couple of years. However when the band released the Labour Of Love album in 1983, where they started to take a more pop direction, Peel subsequently lost interest and rarely played any of their material.

(The following list was compiled only from the database of this site and the John Peel Papers and is certainly incomplete. Please add further details if known.)

Retrieved from "https://peel.fandom.com/wiki/UB40?oldid=246962"
Community content is available under CC-BY-SA unless otherwise noted.