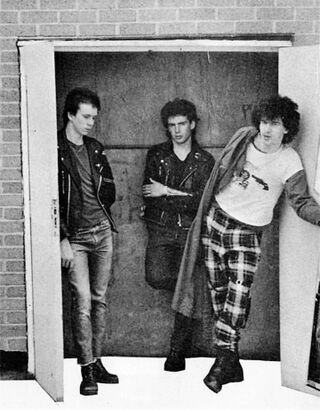 UK Decay are an English post-punk band, based in Luton. They were born out of the ashes of another Luton band called the Resiztors, who had formed in 1978. The Resiztors' lineup consisted of guitarist Steve "Abbo" Abbott, drummer Steven David Harle, bassist Martin "Segovia" Smith and vocalists Ricky Smith and Paul Wilson. After the vocalists' departure in the spring of 1979, the remaining band members changed their name to UK Decay, with Abbott as singer (and guitarist). They soon released the Split Single 7" EP in partnership with fellow local band Pneumania, on their own Plastic Records label. The EP featured two tracks from each band, with UK Decay contributing "UK Decay" and "Car Crash". Split Single sold extremely well, mainly thanks to a damning review in the NME by Danny Baker and Charles Shaar Murray. At the same time, some UK Decay members produced their own monthly fanzine The Suss and ran their own punk record and clothes shop called Matrix. Guitarist Steve Spon was soon recruited from Pneumania, allowing Abbo to concentrate on frontman duties.

The next release for Plastic Records was UK Decay's The Black 45 four-song EP, issued in early 1980. It hovered in the UK Indie Chart for 15 months. Alex Howe from Fresh Records offered to license the first two singles, and signed UK Decay to the label. The first official release for Fresh was the single "For My Country", issued in September 1980. "For My Country" received airplay from John Peel (for whom they would record two sessions) and spent eight months in the indie chart, reaching No. 13. The single was promoted by a major UK tour with the Dead Kennedys. By 1981, two further singles had also been released, "Unexpected Guest" and "Sexual". The former achieved the band's highest indie chart placing of No. 4, and paved the way for UK Decay's debut album, For Madmen Only, released by Fresh in December 1981. The album had taken a year to gestate, due to delays caused by a time-consuming US tour and a frustrating search for a new permanent bass player. When original bassist Smith left, Lorraine "Lol" Turvey from the Statics stood in for some UK dates and an early 1981 European tour. Following that stint, K-OS returned home and Eddie "Twiggy" Branch from Northampton joined on bass, just in time to finish the album. During this period, Abbo jokingly referred to the band's sound as "goth" in a Sounds interview, helping to immortalize the beginning of the gothic rock movement, although UK Decay considered themselves a punk band first and foremost.... (Read more)

In 2004, on the occasion of Peel's death, Steve Spon and others from the band paid lengthy tribute to Peel:

"I am deeply saddened by the tragic loss of John Peel, ‘Peeley’ as he was affectionately known. I remember being totally awestruck one day on answering the phone in our ‘Welly’ st. HQ. It was unmistakably the legendry Peeley himself on the other end of the phone and I was now speaking with the great man himself. “Is that Spon from ukay decay?” he asked. It took a few moments for me to gather myself to answer I knew instantly who it was as I uttered a very nervous “yes it is”. The Peel Show was like a beacon of light, bringing exciting new music to the nations listening public against a background of bland ‘pap’ and ‘dinosaur’ ethics, prevalent in the music scene in the late 70’s. Peeley was the first DJ on the BBC at a time when there wasn’t any real competition, to broadcast Punk and New Wave. I would record his shows onto cassette and play them back on the cassette whilst driving round the midlands doing my van-driving job. I recall driving round the industrial ruins of Corby whilst listening to The Fall's Industrial Estate or the Human League's Circus of Death at full volume, these tunes and more made me feel alive and relevant and I probably wouldn’t have left that driving job and form a band, had I not listened to the rich variety of music that Peeley played on his show." [1]

The band did another session on their return from the USA, but disintegrated not long afterwards: however, Spon was to return to the BBC studios with In Excelsis in 1984. UK Decay reformed in the early 2000s and are still performing.

Retrieved from "https://peel.fandom.com/wiki/UK_Decay?oldid=242745"
Community content is available under CC-BY-SA unless otherwise noted.