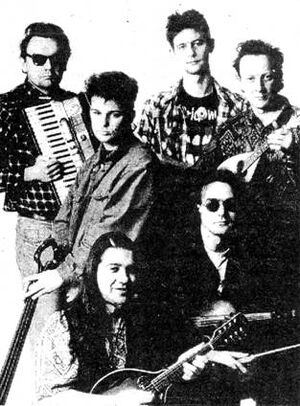 The Ukrainians are a British band, who play traditional Ukrainian music, heavily influenced by western post-punk. The Ukrainians were formed in 1990 by Wedding Present guitarist Peter Solowka, with singer/violinist Len Liggins and mandolin player Roman Remeynes, after all three had played on the Wedding Present's Ukrainian John Peel Sessions recordings (Ukrayinski Vystupy v Johna Peela, released 1989). Following the success of that release, the trio began composing and recording in Ukrainian as a separate band.  In 1991, their first EP, Oi Divchino, was awarded Single of the Week by British music weekly, NME. Notably, the video for this release was filmed in pre-revolution Kiev making them the first western band to produce a video entirely in Eastern Europe. In the same year, Solowka left the Wedding Present, later claiming that he had been kicked out, the success of the Ukrainian project making him the scapegoat for the band's lack of mainstream success. Since 1991, the band have released five studio albums as well as various live albums and EPs, all without chart success in the UK. They continue to tour regularly and celebrated 20 years of their first release in 2011 with a tour of British Ukrainian clubs.

Between 1987 and 1989, the Wedding Present (labelled incorrectly by the British press as heir apparent to the Smiths) periodically went into the BBC studio of John Peel and recorded traditional Ukrainian folk songs. Eventually, in 1990, three members of the Wedding Present would branch off to form the Ukrainians. The Ukrainians did two sessions for Peel's show, in 1991 and 1993, but Peel seemed to have lost interest in the band after the mid-90s and rarely played any of their later material.

In 2012, Peter Solowka recalled the band's early years and debt to Peel in the video U Is For The Ukrainians as part of the online release of details of John Peel's record collection by TheSpace website/John Peel Archive. (See also Record Collection: U.)