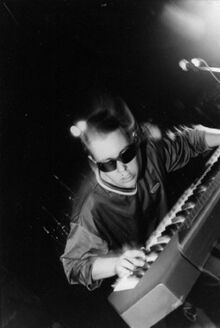 Ultraviolence is an industrial/techno band formed in London in 1991 and headed by 'the Quentin Tarantino of techno' Johnny Violent (b. Jonathan Casey). To date, they have released five studio albums, including a ten-year retrospective and six EPs/singles. The group have produced a number of club tracks which include the tracks Hardcore Motherfucker and Psycho Drama and have been recognised as being at the 'forefront of the UK Industrial-Cyber scene'. The Ultraviolence sound incorporates elements from various styles including hardcore techno/gabber, breakbeat hardcore, industrial techno, power noise, metal and rap.

A substantial body of the Ultraviolence releases received positive critical reception since the first album Life of Destructor gaining '5Ks' from Kerrang magazine. In 2004 Ultraviolence released a retrospective two CD album titled Blown Away 1994-2004. Johnny Violent has worked with several female vocal artists on different releases, but as of 2005, singer and angle grinding stage performer Mel Allezbleu has become a permanent member of the band...(Read more)

Casey had adopted the name, Ultraviolence (in reference to A Clockwork Orange) and began working hard towards his self-financed debut single, Shout and possibly for the first time, successfully fusing electronic dance beats with industrial & metal. John Peel played the record often and invited Ultraviolence to record what was the first Peel session recorded in a home studio: [1] the track We Are The Dead drew from John the comment, "That's Ultraviolence taking an unnecessarily pessimistic view of things, I think."

Due to the fact that their music was by and large instrumental, the opportunity for a wrong speed moment was always in the air, and one such occurred on 24 September 1993. After playing a white label of their I, Destructor, John noted that the band had now signed to Earache Records, which he felt to be "wholly appropriate"...then noticed he had been playing the track at 33 1/3 rpm throughout.

Retrieved from "https://peel.fandom.com/wiki/Ultraviolence?oldid=224061"
Community content is available under CC-BY-SA unless otherwise noted.