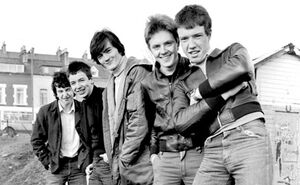 The Undertones are a punk rock/New Wave band formed in Derry, Northern Ireland, in 1975. From 1975 to 1983, the Undertones originally consisted of Feargal Sharkey (lead vocals), John O'Neill (rhythm guitar, backing vocals), Damian O'Neill (lead guitar, backing vocals), Michael Bradley (bass guitar, backing vocals) and Billy Doherty (drums). Although much of the earlier Undertones material drew influence from punk rock and new wave, the Undertones also incorporated elements of rock, glam rock and post-punk into material released after 1979, before citing soul and Motown as the influence for the material released on their final album. The Undertones released thirteen singles and four studio albums between 1978 and 1983 before Sharkey announced his intention to leave the band in May 1983, citing musical differences as the reason for the break up. The group had been set to reform to play at Peel's 50th birthday party in August 1989, but had to cancel due to a family bereavement.

In November 1999, the Undertones reformed but upon Sharkey declining, they replaced Sharkey with fellow Derry native, Paul McLoone who in addition to being the group's new and permanent frontman is also a DJ with the Irish national and independent radio station, Today FM.

The Undertones are still together to this day, often performing gigs all over the world with McLoone serving as the current frontman.

Peel mentioned on his 17 May 1978 show getting a phone call from a band called the Undertones who were from Northern Ireland and mentioned that they were going to send him a tape. After receiving and hearing the tape, Peel immediately liked the band. He was such a fan of the group, that he played their song Teenage Kicks twice in one show in 1978 [1].

On 22 January 1979 the band joined Peel in the studio during his programme, having just recorded a session for the show at Maida Vale.

He also made a TV documentary in 2001 on the band called The Story Of The Undertones: Teenage Kicks.

Members of the band including Feargal Sharkey attended John Peel's funeral in 2004 and the song Teenage Kicks was played during the ceremony.

(The list below is incomplete. Please add further details if known.)