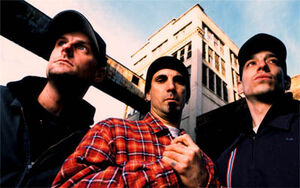 Unsane are an influential noise rock trio that formed in New York City in 1988. Their music also touches on elements of hardcore punk and metal. In 1988, singer/guitarist Chris Spencer, bass guitarist Pete Shore and drummer Charlie Ondras were students at Sarah Lawrence College when they formed as Lawn-Chair-Blisters before changing their name to Unsane. Released in 1991, the band's self-titled debut album was known for its harsh music and gruesome cover art, featuring a photo of a decapitated man on a New York city subway track … (read more at Wikipedia.)

Peel was an enthusiastic supporter of the band from their first single, released under the name Unsane NYC. Returning to it on 20 April 2004, he described the record as “a classic ... we played to death in 1989".

The band’s first album also received heavy airplay, with five tracks featured on 14 December 1991, while their first session was repeated three times, including on 11 July 1992 to mark the death of original drummer Charlie Ondras. The release of the band’s Peel Sessions CD apparently followed direct requests to Strange Fruit by the DJ.[1]

Retrieved from "https://peel.fandom.com/wiki/Unsane?oldid=239158"
Community content is available under CC-BY-SA unless otherwise noted.