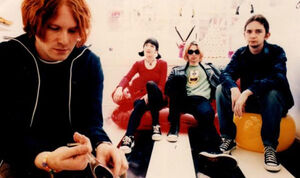 Urusei Yatsura were a Scottish lo-fi indie band from Glasgow founded in 1993 by Fergus Lawrie and Graham Kemp, who with brother and sister, Ian and Elaine Graham formed the band. They took their band name from the manga Urusei Yatsura, written by Rumiko Takahashi, and contributed their first recording, Guitars Are Boring, to a compilation album released by the Kazoo Club. This was based in Glasgow, and run at one point by the future Franz Ferdinand singer Alex Kapranos. Over the years they released three albums: We Are Urusei Yatsura (1996), Slain By Urusei Yatsura (1998) and Everybody Loves Urusei Yatsura (2000). Albums in America and Japan were released under the name of Yatsura for legal reasons. The band had one Top 40 hit single, 1997's "Hello Tiger", which reached #40 in the UK Singles Chart. Urusei Yatsura split in June 2001, leaving Kemp to work on solo material and the other band members to form Projekt A-Ko. In 2011, Lawrie formed the three piece band Angel of Everyone Murder with Sarah Glass and Lea Cummings on bass, and released a self-titled double album on Kovorox Sound. The release featured six drone compositions of 15-20 minutes each, made with self modified guitars he called HALO guitars. In 2012, Angel of Everyone Murder 2 was released.

Peel interviewed Graham Kemp along with Jennifer from Kitten Frenzy fanzine on his show from 08 October 1994. Before playing an Urusei Yatsura track from the publication’s Kazoo Collection compilation on the show, he invited Kemp and the rest of the band to record a session (they eventually did many sessions). Peel had seen them live at Glasgow’s 13th Note venue two days earlier with Ken Garner and others.

Retrieved from "https://peel.fandom.com/wiki/Urusei_Yatsura?oldid=168461"
Community content is available under CC-BY-SA unless otherwise noted.