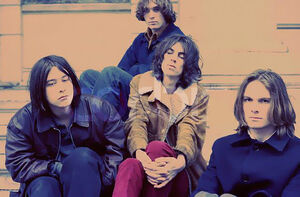 Verve were an English indie band formed in Wigan, Greater Manchester in 1990 by lead vocalist Richard Ashcroft, guitarist Nick McCabe, bass guitarist Simon Jones and drummer Peter Salisbury. Guitarist and keyboard player Simon Tong layer joined the band at a later date. The band were originally formed as Verve, but a dispute with a jazz label also of the same name, forced the band to change the name to The Verve from 1994. Beginning with a psychedelic sound, by the mid-1990s the band had released several EPs and three albums. It also endured name and line-up changes, break-ups, health problems, drug abuse and various lawsuits. The band's commercial breakthrough was the 1997 album Urban Hymns, one of the best-selling albums in UK Chart history, and the single "Bitter Sweet Symphony", which became a worldwide hit. In 1998, the band won two Brit Awards—winning Best British Group, appeared on the cover of Rolling Stone magazine in March, and in February 1999, "Bitter Sweet Symphony" was nominated for the Grammy Award for Best Rock Song. Soon after their commercial peak, The Verve broke up in April 1999, citing internal conflicts. According to Billboard magazine, "the group's rise was the culmination of a long, arduous journey that began at the dawn of the decade and went on to encompass a major breakup, multiple lawsuits, and an extensive diet of narcotics". During an eight-year split, Ashcroft dismissed talk of a reunion, saying: "You're more likely to get all four Beatles on stage." The band's original line-up reunited in June 2007, embarking on a tour later that year and releasing the album Forth in August 2008, which spawned the hit single "Love Is Noise". Amid revived tensions, the band broke up for the third time in 2009. (more on wikipedia)

Peel heard the group through the Hut Record label, which the band were signed to. The band later did a session for his show in 1992, but after their debut album A Storm In Heaven was released in 1993, Peel somehow lost interest in the band and rarely played any of their material, except when his daughter Alexandra Ravenscroft requested the track Sonnet on his BBC Radio One show from 23 December 1997.

The session track 'Already There' is available on the compilation Strange Fruit: Hut Recordings / The Peel Sessions (1992, Strange Fruit)

Retrieved from "https://peel.fandom.com/wiki/Verve?oldid=227649"
Community content is available under CC-BY-SA unless otherwise noted.