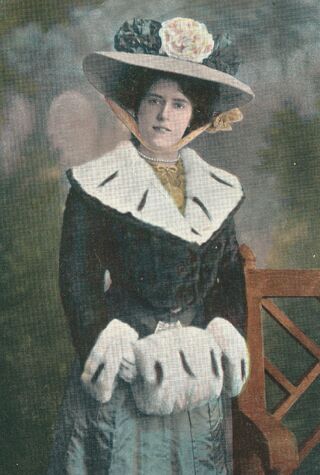 Vesta Victoria (1873–1951), born Victoria Lawrence, was an English music hall singer and comedian. She was famous for her performances of songs such as "Waiting at the Church" and "Daddy Wouldn't Buy Me a Bow Wow", both of which were written specially for her. Vesta's comic laments delivered in a deadpan Cockney style were even more popular in the USA: she was, at the beginning of the twentieth century, one of the most successful British entertainers in America. Nevertheless, she remained for most of her career as a live performer in England.

Her songs told in part of abuse at the hands of men, which would appear to be largely autobiographical, given her two failed marriages and the loss of the huge fortunes she amassed to a succession of gigolos. This has been seen as important in the development of the blues.

Victoria gained two entries in the Peelenium, neither of them the songs she was most famous for.

Retrieved from "https://peel.fandom.com/wiki/Vesta_Victoria?oldid=239704"
Community content is available under CC-BY-SA unless otherwise noted.