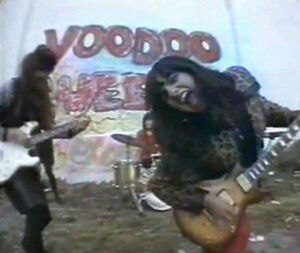 The Voodoo Queens were an indie band from North London and one of the very few predominantly all female British Asian group. The band composed of Anjali Bhatia (guitar, vocals), Ella Guru (guitar, backing vocals), Stefania Lucchesini (drums), Rajni Bhatia (keyboards) and Anjula Bhasker (bass). Rebecca Lunn later stepped in for Anjula who had to leave to visit family in India. In late 1992, Anjali left the group Mambo Taxi where she was the drummer to start the Voodoo Queens, along with her sister Rajni and cousin Anjula, Ella Guru (of Mambo Taxi), and drummer Sunny. Mary Deigan replaced Anjula on bass in 1994. The band split in 1999 and Ella Guru (NOTE: she is not related to or has any connection with a group who has the same name as her, that had an entry in the 2004 Festive Fifty with "Park Lake Speakers") joined the Stuckist artists. Anjali Bhatia went on to become a solo artist with more dance orientated material. Deigan joined The Hangovers. The music press, in addition to associating the band with the Riot Grrrl scene, also grouped them with other Asian-fronted bands such as Cornershop; Anjali felt that the press focused more on the music scene instead of the musical content.

Peel discovered the band when they were touring with Cornershop at The Falcon in November 1992. So impressed with their performance, that he invited them for a session, despite the band performing three songs (one of which was repeated) and the entire set lasting only nine minutes. He compared seeing them live to seeing the Slits for the first time. The session was recorded in January 1993, whilst Anjali was still working at Virgin Megastore in Oxford Street. Other radio and TV appearances followed, including a further two Peel Sessions, and a busking competition against Boyzone on Channel 4's music and arts programme Naked City.

Retrieved from "https://peel.fandom.com/wiki/Voodoo_Queens?oldid=142330"
Community content is available under CC-BY-SA unless otherwise noted.