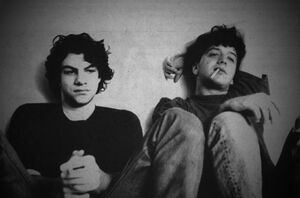 Ween is an American experimental rock band. They formed in 1984 in New Hope, Pennsylvania when central members Aaron Freeman (Gene Ween) and Mickey Melchiondo (Dean Ween) met in an eighth grade typing class. The band's style is eclectic, and while they could generally be referred to as rock music, one of their defining tendencies has been experimentation with various styles incorporating a strong element of humor and absurdity. Both Gene and Dean are skilled multi-instrumentalists who overdubbed various instruments on their recordings, though they also record with the regular touring band. Ween signed to Twin/Tone Records in 1989 and released their first album GodWeenSatan: The Oneness. After a 28-year run, Ween broke up in 2012. On November 16, 2015, the band announced that they would reunite for three shows in Colorado on February 12, 13, and 14th, 2016. (Read more at wikipedia)

John hadn't initially taken to Ween's first album but as they kept getting namechecked by the likes of Babes In Toyland, he was encouraged to take a second listen. As a result they got their debut play on the first show on 1991. John then became a supporter of Ween's music in the early 90s, playing often music from their records and even lamenting the fact once that he was not able to see the band in concert. Ween recorded two sessions for John Peel's show. For the first session, Ween used the touring band, consisting of Gene and Dean on vocals and guitar, Mark Kramer on piano and bass and Claude Coleman on drums. For the second session (which included four songs that were unreleased at the time), Gene and Dean played all the instruments.

Retrieved from "https://peel.fandom.com/wiki/Ween?oldid=231393"
Community content is available under CC-BY-SA unless otherwise noted.