"What I really want is folk music to still be around. It's a shame because the culture worldwide is becoming so affluent and so computerised, that all of that's really gonna go away. A skiffle group is never gonna happen ever again. At times, we [the White Stripes] almost ignore our own music. If we have the stage, we've gotta play Son House's music, because there's nobody to keep it alive. We don't wanna be known as the band that's conducting music instruction class. But that's all everyone talks about - why MTV's not good, why radio's not good. And the answer is really because whatever you want to call it - blues, country, folk - isn't around any more. That's why everyone's so mad, and I'm tired of it being my job to bring it back." (Jack White, from What's Eating Jack? by Andrew Perry, The Observer 2004-11-14 (retrieved 2011-02-15).

They were rumoured to be siblings (this was repeatedly propounded by the band themselves), but were in fact a divorced couple.

The band was formed in Detroit, Michigan in 1997 and formally announced a split in early 2011. They played a mixture of raw blues and punk that eschewed sophisticated lyricism and instruments that proved highly successful with the release of albums White Blood Cells and Elephant. 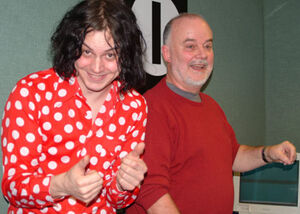 The basic low-fi approach (using vintage recording equipment, no bass guitar and steadily rhythmic drumming with few flourishes) extended to their stage presence: a stark mixture of red, white and black that concentrated attention on the music. White stated that their raw and elemental first album, The White Stripes, created an aura that they never surpassed. Nonetheless, his energetic guitar playing requires him to use effects pedals and different models that recreate a powerful wall of sound which it is hard to believe only comes from two musicians. [1]

Their albums sold in vast quantities (Elephant shipped double platinum in England), but the band were also highly successful singles artists. They notched up 14 top 40 hits, with three ('Seven Nation Army', 'Blue Orchid' and 'Icky Thump') all making the top ten (and the latter narrowly missing the top spot).

Peel became aware of the band's sound in 2000 following an early LP purchase:

"I first heard the White Stripes when we went to an event in Groningen in the Netherlands called Noorderslag and Eurosonic, and there's a wonderful record shop, very small, not much bigger than this studio, it's just a great record shop, and I went in there and the first White Stripes LP was in there as an import from the States. And I just liked the look of it and I looked at the titles - you develop an instinct, d’you know what I mean? And it looked like the sort of record I would like, so I took it out and I did like it, and started playing it." [2]

Peel and the band obviously shared a mutual admiration. On John Peel's Record Box, Jack White said of him:

"He always wants to uncover the underdog, he’s doing the DJ’s job…finding the little cracks in the cement around the world. John Peel’s the most important DJ of all time, I think."

JP regarded them as revivalists of a sound he was old enough to remember from the era of Jimi Hendrix and the Stooges:

"That sort of proper, over-the-top guitar playing has always been something I've enjoyed very much. It was just good to hear that kind of sound again. (2001) was an extraordinary time. The thing is, it wasn't hype. The NME has an obligation to find a new sensation every week, because that's what sells. But I think people were relieved at the simplicity and the directness of The White Stripes, and the fact that they were making a noise they could identify with." [3]

"John just welled up. You couldn't have prised the smile from his face with a crowbar.'" (Margrave Of The Marshes, Corgi, p. 444.)

On 29 January 2003, John announced that, though the new Stripes LP would not be due out until April, he would play three tracks from it that night, and possibly three more the next and the following Tuesday "and just carry on like that, possibly forever." He duly broadcast six over two nights.

However, when Tuesday arrived, he said:

"I promised that I was going to play you more tracks from the new LP by the White Stripes, having played five or six at the end of last week. Now, it's an interesting thing, because when bands first start out, both they and their record labels are usually quite keen that you should play their stuff on the radio....but then there comes a point....I'm not blaming the bands for this at all....the record labels really, and their universal marketing plans and this kind of thing....what they want you to do is NOT to play the record, at least not until they say it's alright to play the record. And somebody gave me a copy of the new White Stripes record last week, and I thought, the record exists, therefore I play it, which seems to me to make perfect sense. But it seems not, so we can't play you any more tracks from it, although they did say that we could play two of the tracks that we'd already played. Now this is what we doctors call bollocks, so instead I'm going to play you some other things." [4]

The White Stripes had far more singles in John Peel's Record Box than any other artist did. There were also a number of records somehow related to the band. Those by the White Stripes were as follows:

The following had a close White Stripes connection:

:The duo had a total of eight FF entries. Three songs came from White Blood Cells and two from Elephant, and two of the tracks from Cells charted again when re-released as singles. Also an eight entered Dandelion's Radio Festive Fifty in 2007 with the track Icky Thump.

Full set list from Reading, 2002-08-23, as listed at www.whitestripes.com (not all songs may have been broadcast):

The following list is as complete as possible but was compiled only from the database of this site and Lorcan's Tracklistings Archive. Please add additional information if known.