(This page covers the career of Will Oldham, including work as Bonnie 'Prince' Billy and variations of the Palace name such as Palace Brothers and Palace Music.) 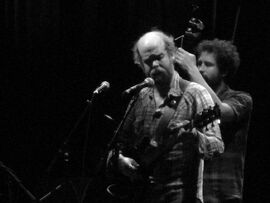 Will Oldham (born January 15, 1970), better known by the stage name Bonnie 'Prince' Billy, is an American singer-songwriter and actor. From 1993 to 1997, he performed and recorded under variations of the Palace name, including the Palace Brothers, Palace Songs, and Palace Music. After releasing material under his own name, he adopted the "Bonnie 'Prince' Billy" moniker for the majority of his output since 1998.

Oldham is known for his "do-it-yourself punk aesthetic and blunt honesty,"[1] and his music has been likened to Americana, folk, roots, country, punk, and indie rock. He has been called an "Appalachian post-punk solipsist",[2] with a voice that has been described as "a fragile sort-of warble frittering around haunted melodies in the American folk or country tradition."[3] (Read more at Wikipedia.)

Peel was a keen follower of Will Oldham’s work for over a decade across a wide array of performing names, after quickly picking up on the debut Palace Brothers single, ‘Ohio River Boat Song’, which reached #9 in the 1993 Festive Fifty. In The Festive Fifty (first edition, Nevin Publishing, 2005, pg 39) Dandelion Radio DJ Mark Whitby writes of the track:

“The first experience for many of us of the stunning talent that is Will Oldham came through this gorgeous country ballad that takes a classic formula but deals with it in such sensitivity and pathos that it transcends any easy categories. The voice of Oldham would appear in the Festive Fifty again, though shamefully infrequently, as he constructed a fascinating existence in music treading a path between the traditional and the idiosyncratic.”

There were seven Peel sessions between 1993 and 2002, including a live set recorded at the DJ’s 60th birthday party in 1999. In 2016, the Pond Scum collection featured material from three of them, spanning a period of eight years. In an interview, Oldham recalled the process of recording the sessions for Peel:

“It’s affirming to have that experience. It’s like how I approach recording sessions in general. You put the work in before the studio because you want the record to sound kind of magical. The only way you can stand behind that magic is that if you did something magical instead of meticulously trying to recreate magic.”[1]

For casual listeners, Oldham's best-known song probably remains 'I See A Darkness', which reached #23 in the 1999 Festive Fifty and was also notably covered by Johnny Cash (with Oldham on backing vocals [2]). While there is no evidence that Peel played the reworking by Cash on his show, the DJ did give airtime to Oldham's own cover versions of old favourites by PJ Harvey, Kevin Coyne and Prince, among others. The Bonnie 'Blue' Billy version of 'Little Boy Blue' (originally by Bobby ‘Blue’ Bland) was voted #46 in the 2000 Festive Fifty.

1. Recorded 1993-11-04. Broadcast 27 November 1993 (JP: “A session I’ve been looking forward to for several months.) (JP: ‘Will Oldham writes the songs. He has this gift of making them all sound as though they were all set to Southern Baptist hymn tunes.’)

(Listing below is chronological, by first play under artist name, and compiled only from the database of this site and Lorcan's Tracklistings Archive. Please add more information if known.)

Retrieved from "https://peel.fandom.com/wiki/Will_Oldham?oldid=257674"
Community content is available under CC-BY-SA unless otherwise noted.