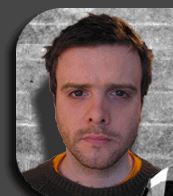 William Robert Anfield Ravenscroft (born 12th January 1976) is the oldest of Peel's children, whose first name was named after schoolboy character William Brown in the Just William stories and the middle names Robert Anfield after his grandfather and Liverpool Football Club's ground: he studied at Combs Middle School in Stowmarket, Suffolk and at the University of Liverpool studying Archaeology. William later on got involved in setting up a website called Unpredictable Porridge [1], where unsigned bands could have their music listened to directly by music executives. The website has since been closed and there is no further news on William's current activities.

William met his long term girlfriend Zahra d'Aronville at university, where she was studying Zoology. After graduating, the couple moved to Newcastle, where Zahra was working as a Marine Biologist at an aquarium and later promoted to management level. [2] In 2008, they decided to get married at St Andrew's Church in Great Finborough, Suffolk. [3] The couple currently have three children. [4]

John Peel often mentioned his son on his radio shows and in one television documentary in 1999 called Father And Son, he talked about his relationship with William and his criticism of his bedroom hygiene. Later on in his BBC Radio One show from 01 September 1999, Peel apologised privately and publicly to his son William on air about embarrassing him.

The list comes from the database of this site and is incomplete. Please add further information if known.

Retrieved from "https://peel.fandom.com/wiki/William_Ravenscroft?oldid=251549"
Community content is available under CC-BY-SA unless otherwise noted.