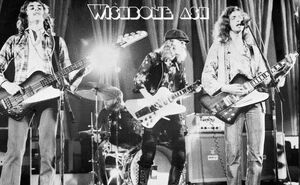 Wishbone Ash are a British rock band who achieved success in the early and mid-1970s. Their popular records included Wishbone Ash (1970), Pilgrimage (1971), Argus (1972), There's the Rub (1974), and New England (1976). They were one of the first bands to use twin lead guitars. Wishbone Ash are considered to be one of the major innovators of the harmony twin lead guitar format. Their contributions helped Andy Powell and Ted Turner to be voted "Two of the Ten Most Important Guitarists in Rock History" (Traffic magazine 1989), and to appear in the "Top 20 Guitarists Of All Time" (Rolling Stone). Melody Maker (1972) described Powell and Turner as "the most interesting two guitar team since the days when Beck and Page graced The Yardbirds". Formed in Torquay, Devon, in 1969, out of the ashes of trio The Empty Vessels (originally known as The Torinoes, later briefly being renamed Tanglewood in 1969), which had been formed by Wishbone Ash's founding member Martin Turner (bass & vocals) in 1963 and complemented by Steve Upton (drums and percussion) in 1966. The original Wishbone Ash line-up was completed by guitarists/vocalists Andy Powell and Ted Turner. In 1974, Ted Turner left the band, and was replaced by Laurie Wisefield. The band continued on with strong critical and commercial success until 1980. After revolving line-ups featuring former members from King Crimson, Trapeze, and Uriah Heep, Wisefield left in 1985. In 1987, however, the original line-up reunited for several albums – Nouveau Calls, Here to Hear and Strange Affair – until 1990, when Upton quit the band. After Martin Turner was replaced in 1991, the band recorded The Ash Live in Chicago, before Ted Turner left in 1993.

Initially, Peel was a fan of the group and in an interview with Roy Hollingworth of the Melody Maker in the fall of 1971 stated: [1]

"I heard Wishbone Ash for the first time, and haven't been so impressed with a relatively new band for a long time. Their music is original, exciting and beautifully played."

This may refer to the gig the night before Top Gear on 03 October 1970 during which he expresses enthusiasm for the, at the time, unreleased band and would like to get them in for a session.

As the DJ related in his sleevenotes for the 1977 Classic Ash compilation, he was first introduced to members of predecessor outfit Empty Vessels during a visit to Exeter in the late 1960s to see Principal Edwards Magic Theatre. He then compared an early Wishbone Ash gig at the Nag's Head pub in Wollaston, Northants, which was run by Peel's friend "Big Bob" Knight, before they were signed by MCA in October 1970.[2]

Wishbone Ash were heavily promoted by Peel in the early 1970's, which led them to become a commercially successful "album band" and favourites of the Sounds of the Seventies audience. They did their first BBC Radio One session for Bob Harris' show and were featured by Harris and the other SOTS DJs as well as by Peel. On BFBS's Partners In Dispute in 1992 John mentioned that the band were one of his favourites from the 70's and the track "Time Was" was played. However, this contrasts with his statement from the previous year on the same station implying his musical values had changed:

"I have to apologise for being more than usually subdued in the course of this programme, as I keep emphasising I don't feel terrific and I think I should have phoned in ill or something, but if I had done that, you would have got something like a Wishbone Ash concert and I'd do anything to save you from that." [3]

Ken Garner's The Peel Sessions lists these as sessions, although Peel states it is the Band In Concert, exclusive to his show.

Retrieved from "https://peel.fandom.com/wiki/Wishbone_Ash?oldid=251440"
Community content is available under CC-BY-SA unless otherwise noted.