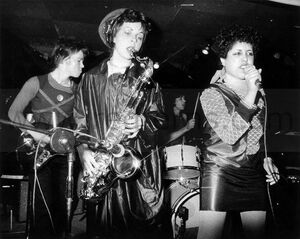 X-Ray Spex were an English punk band from London that formed in 1976. During their first incarnation (1976–79), X-Ray Spex only managed to release five singles and one album. Nevertheless, their first single, "Oh Bondage Up Yours!", is now acknowledged as a classic punk rock single and the album, Germfree Adolescents, is widely acclaimed as a classic album of the punk rock genre. After Poly Styrene (Mari Elliot), the lead singer of the band left in 1979, they renamed themselves Classix Nouveaux with a new singer named Sal Solo and the group radically changed their musical style to a synth pop sound. Classix Nouveaux became fairly successful in many countries, playing to crowds of up to 25,000 people. Their final appearances came in 1985 after which they split up, with Sal Solo going on to start a solo career. In 1991 X-Ray Spex re-formed for a short while and then again in 1995 with performances every now and then until 2011 when Poly Styrene died of cancer at the age of 53.

In 1977 Peel ranked "Oh Bondage Up Yours!" as one of his favourite tracks of the year in his personal 1977 Festive Fifty. The group later did two sessions for Peel's show in 1978; the first was recorded before the band released their second single.

Retrieved from "https://peel.fandom.com/wiki/X-Ray_Spex?oldid=223985"
Community content is available under CC-BY-SA unless otherwise noted.