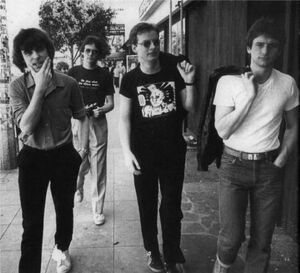 Peel discovered the group when the band sent him a poster for a gig in London and demos of their material. According to Andy Partridge on an interview with the John Peel Centre, Peel attended their gig in London and liked the band so much, that he invited them for a session, despite the group not having a record deal. After the session was played, different record companies tried to sign them on, which at the end was succeeded by Virgin in 1977. In 1978, XTC released a dub EP called "Go+" as a freebie included with some of the copies of their second LP "Go 2". Peel appreciated the experimental nature of the work, going as far as on saying on the 06 October 1978 show that he thought he was going to end up listening to it more than the album itself and, thus, featured it in his tracklists. However, on one instance, a funny moment occurred when Peel played one of the tracks at the wrong speed and instead of three minutes of dub, it ended up as seven with Partridge singing in a very turgid voice. The band did four sessions for Peel and also performed the Pickin' The Blues intro on 15 October 1979 with Partridge impersonating Peel with his voice and intro of made up artists performing on the show. During that session the band recorded a version of the song "Scissor Man" from their third album "Drums and Wires" which eventually ended up on the doublepack edition of the single "Towers of London" with special thanks to Peel on the label of the vinyl. All of the band's albums up to "Oranges & Lemons" were found on his record collection.

Retrieved from "https://peel.fandom.com/wiki/XTC?oldid=206800"
Community content is available under CC-BY-SA unless otherwise noted.