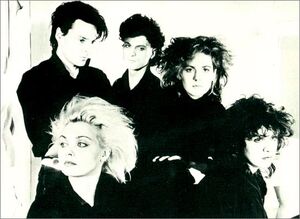 Xmal Deutschland, often written as X-Mal Deutschland, was an alternative goth band from Hamburg, Germany. Founded in 1980 with a completely female line-up, they became successful in their field outside their native country, especially in the UK, where they were part of the Neue Deutsche Welle (German New Wave) music scene. The group wrote and sang in the German language and had different line ups over the period. The group finally split in 1990.

Peel played many acts of the German New Wave in the early 80's and Xmal Deutschland were part of the scene. The group performed in the German language and did four sessions for John Peel's show.

(The list below was compiled only from the database of this site. Please add more information if known.)

Retrieved from "https://peel.fandom.com/wiki/Xmal_Deutschland?oldid=243650"
Community content is available under CC-BY-SA unless otherwise noted.