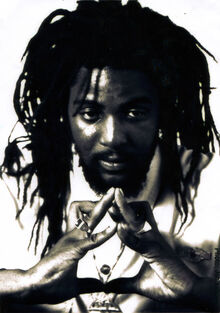 Rolando Ephraim McLean (born 1 October 1970), better known as Yami Bolo, is a Jamaican reggae singer. Yami Bolo grew up in postal zone 13 of Kingston and started releasing singles at the age of 11: his first professional job and exposure was with Sugar Minott's Youth Promotion Crew. His first singles were released in 1986, and he had his greatest success working with Augustus Pablo in the late 1980s and early 1990s, on singles such as "Struggle in Babylon". His success as a reggae artist has allowed him to record many songs professing the Rastafarian faith as taught by the Ethiopian Orthodox Church throughout his three decades in the reggae industry. Yami Bolo has been performing Rastafarian works since the mid-1980s touring with many different reggae groups including Augustus Pablo's Rockers crew.

In addition, Yami Bolo has supported the city of New Orleans and its surrounding areas by volunteering his musical talent at live performances in Louisiana in the summer of 2009. In 2014 he was reportedly recording a new album, to be called The Singer.... (Read more

AllMusic adds that "Bolo believes that he has been divinely called to make himself and his entourage revolutionary soldiers of the Almighty on a mission to spread their message of love, peace, and hope to the entire world with their performances and recordings. He is particularly interested in uplifting the youth songs that warn against violence such as 'Gun War.' [1]

The 1998 single Richer Than Cory (based on the Them/Van Morrison song 'Richard Cory') is the penultimate disc in John Peel's Record Box. John espoused hopes that his plays of Jah Jah Love in the latter part of 2002 might have propelled the song into the Festive Fifty: this proved to be either a blindside or optimism. Certainly, the fact that he recommended Bolo tracks three times in his 2002 record boxes and the LP Healing Of All Nations was found in his Record Collection after his death gives some indication of the respect the DJ accorded to Bolo's work.

Retrieved from "https://peel.fandom.com/wiki/Yami_Bolo?oldid=231264"
Community content is available under CC-BY-SA unless otherwise noted.