(This page is about the UK band. For the US label of the same name, see Yazoo Records. This page also covers Alison Moyet as a solo artist) 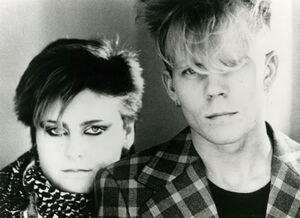 Yazoo (known as Yaz in North America for legal reasons) were a British synthpop duo from Basildon, Essex, England, consisting of former Depeche Mode member Vince Clarke (keyboards) and Alison Moyet (vocals). Formed in late 1981 after Clarke responded to an advertisement Moyet placed in a UK music magazine, over the next 18 months the duo made two critically acclaimed albums, Upstairs at Eric's and You and Me Both, blending Clarke's synthesizer melodies with Moyet's blues- and soul-influenced vocals. Yazoo enjoyed worldwide success, particularly in their home country where three of their four singles reached the top three of the UK Singles Chart and both their albums made the top two of the albums chart. Despite their success, the duo split acrimoniously in May 1983 due to a combination of Clarke's reluctance to make more records under the Yazoo name, a clash of personalities, and a lack of communication between the pair. Clarke went on to form Erasure, another successful and longer-lasting synthpop duo, while Moyet embarked on a solo career.

In 2008, twenty-five years after splitting up, Clarke and Moyet reconciled and reformed Yazoo to play a successful tour of the UK, Europe and North America in support of the reissue of Yazoo's two studio albums and a box set of their material. The pair briefly reunited in May 2011 to play three Yazoo songs at a music festival organised by their record label, but it seems unlikely that Clarke and Moyet will play together again in the future.

The duo recorded a session for Peel's show in February 1982, which got broadcast in July on that same year. Surprisingly the session has not been added onto the BBC Keeping It Peel website or the 2008 In My Room box set issue.

Yazoo's name had to be changed for the US market because of legal objections raised by Yazoo Records, from which (according to Alison Moyet, quoted in the Wikipedia article on the band) the duo had derived their name. Yazoo Records was founded in the late 1960s, specialised in reissue compilations of rare pre-World War Two blues records by artists like Charley Patton and Son House, and derived its name form the Yazoo River, which flows through the blues country of Mississippi. Peel liked and played Yazoo's music during the duo's commercial heyday, but he does not seem to have returned to it in later years - whereas vintage blues tracks from Yazoo Records releases appear in his playlists throughout his BBC career.

Peel does not appear to have played any of Moyet's solo recordings. When presenting her version of Billie Holiday's song That Ole Devil Called Love on the Christmas TOTP in 1985 he described it as "Something a little spiritual for you on a Christmas afternoon...".

Retrieved from "https://peel.fandom.com/wiki/Yazoo?oldid=219592"
Community content is available under CC-BY-SA unless otherwise noted.