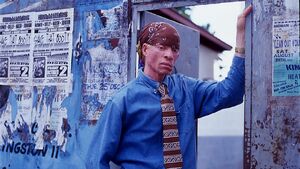 Reggae dancehall artist Yellowman (1956 or 59-) was born Winston Foster in Negril, Jamaica. According to AllMusic:

"He ushered in a new era in reggae music following Bob Marley's death. His early-'80s success brought the popularity of toasting -- the reggae equivalent of rapping -- to a whole new level, and helped establish dancehall as the wave of the future. For better or for worse, he also epitomized dancehall's penchant for "slack" lyrics -- that is, casual violence, sexism, homophobia, [1] and general rudeness. Graphic sexuality was his particular forte, reaching levels of explicitness previously unheard in Jamaica. It brought him numerous detractors, but it was also a big reason for his early popularity. There was more to it than that, though; Yellowman was one of the most verbally nimble toasters of his time, with a loose, easy flow, a talent for improvisation, and a definite wit in his wordplay."

JP began playing Yellowman's material in the early 80s, and also featured his duets with other artists. Yellowman's disfiguring operation on his jaw to remove a tumour affected his music, making it more socially conscious and reflective: it is unknown whether this caused his removal from John's playlists in the 90s, although he gave unstinting praise to his single More Oil Inna Mi Lamp with Frankie Paul, despite claiming he did not understand the subject matter.

After his death, 13 LPs with Yellowman either solo or in collaboration were found in John's collection ([1]).

Retrieved from "https://peel.fandom.com/wiki/Yellowman?oldid=229375"
Community content is available under CC-BY-SA unless otherwise noted.