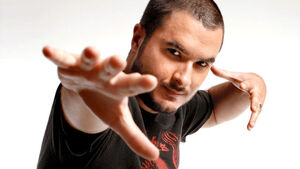 Zane Lowe (born Alexander Zane Reid Lowe on 7 August 1973), also known as "Zipper", is a radio DJ, record producer, and television presenter. He was born in Auckland, New Zealand, where he formed the hip hop group Urban Disturbance, releasing the album 37 Degrees Latitude in 1994 through Deepgrooves Entertainment, and then forming Breaks Co-Op with Hamish Clark. In Auckland, he was also a presenter on the local music station Max TV, before moving to the United Kingdom, where he worked for MTV and XFM. Since 2003 he has presented BBC Radio One's evening show, where he plays a variety of alternative music, including rock, punk, dance, drum and bass, and hip hop. He was also the presenter of the MTV Rocks show Gonzo, having been a former VJ on MTV since 1997, where he presented Brand:New. Lowe currently resides in London with his wife Kara, and his two sons, Jackson and Lucius. On 15 February 2015 it was announced that Lowe would be leaving BBC Radio One in March 2015 to work at Apple.

Lowe took over the 'Evening Session' show on Radio One from Colin Murray on 1 July 2003 [1]. He occupied 8 - 10 pm slot immediately before the Peel Show until July 2004, when the schedules were reorganised. On 14 April 2004 Peel took over the second hour of Zane's show when Lowe was forced to go to hospital to seek treatment for a rib injury he'd suffered over the weekend.

Peel admired Zane's work on BBC Radio One. On occasions he would mistakenly call him Zane Grey, who was an American author best known for his popular adventure novels and stories that were a basis for the Western genre in literature and the arts. In 2003 in front of an audience, Peel criticised many Radio One DJ's who seem to copy acts of shouting and competitions from children's TV presenters, but gave an exemption to Zane Lowe, who enjoyed playing music:

"And I like Zane Grey..Zane, he shouts probably more than anyone else, but he's very very keen on his music and I can forgive a man a lot for that, because as I say historically, it's been people by dickheads basically, who had absolutely no interest in music at all and just saw it as a stepping stone to a career in crap TV."

Zane praised Peel in an interview with The Independent in November 2003, stating to Ian Burrell:

Peel on his show from 27 November 2003 thanked Zane for what he said on The Independent and in May 2004, shared his session of Morrissey with Zane by having it split between songs on both of their shows. After Peel's death, Zane paid his tribute to Peel on the Keeping It Peel website by stating:

"Just adding my love and respect to a lovely man who would have been horrified to know how intimidated I was by him. His love of new music and the life it gave him was never taken for granted by either John or the people who shared in it. More than anything, I feel privileged to have briefly met and worked alongside such a passionate and funny man." [2]

Retrieved from "https://peel.fandom.com/wiki/Zane_Lowe?oldid=152292"
Community content is available under CC-BY-SA unless otherwise noted.