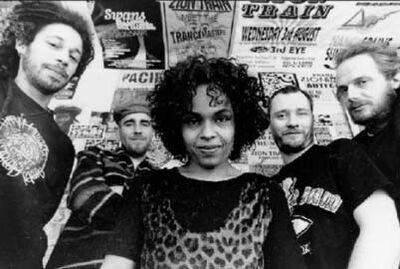 Zion Train are a British dub reggae ensemble. Initially formed in Oxford as a sound system in 1988 by Neil Perch and Ben Hamilton, Colin Cod and Dave Tench joined in 1990 upon relocation to London. The line-up was added to with vocalist Molara in 1992. Their initial releases were the 7" singles Power One and Power Two, which became hits on the dub scene in the early 1990s. In 1992 they released the groundbreaking Follow Like Wolves single, which fused Dub and Acid House styles and spawned their reputation as innovators. Their second album, Natural Wonders Of The World In Dub, hit the UK indie charts in 1994 and was followed by several small-issue EPs. Additionally, they worked on remixes for the Shamen, Afro Celt Sound System, Loop Guru, Kava Kava and others. They released both vinyl and CD material on their own label, Universal Egg, until 1995, when they signed with China Records. They returned to their own label in 1999. Much of their back catalogue was reissued in 2005. (Read more at Wikipedia.)

Zion Train had a long-standing collaboration with Ruts DC and one of the two sessions below was recorded with them: the Ruts song Babylon's Burning became one of a few tracks to hit the Festive Fifty more than once in different versions. In 2013, they were selected by the John Peel Archive as the highlighted artist beginning with Z when initial details of Peel's Record Collection were released because, as Sheila said in the accompanying film, "along with Dreadzone, they were probably the band that John played the most of the electronic dub sound (and) thoroughly enjoyed it."[1]

Neil Perch, live dub mixer and producer for the band and who was also interviewed for the film, claimed that JP played eight out of ten tracks from their second LP, Natural Wonders Of The World In Dub, in one show, but so far this has not been proven by the available track listings.

Singer Molara, who left Zion Train in 2006, said, One of the most amazing people I ever met was John Peel, it was a real privilege to interview him." [2]

Two sessions, including one with Ruts DC. Through The Legs / Scottish Warrior from session #1 released on Dub Revolutionaries: The Very Best Of Zion Train (2×CD, Nascente, 2011). Keeping It Peel lists five sessions, although the second and third are the Glastonbury and Camden sets listed below: the last one has no recording or TX date, is said to have been produced by Bob Sergeant and contains three of the same tracks as the first session here.

The following list was compiled only from the database of this site and Lorcan's Tracklistings Archive. Please add more information if known.)

Retrieved from "https://peel.fandom.com/wiki/Zion_Train?oldid=239718"
Community content is available under CC-BY-SA unless otherwise noted.